Past Executive co-chairperson Rev Kwang Beom Cho offers this personal appeal to United Church members to participate in the current Korea Peace Appeal petition campaign offered by our global partners in Korea, as they seek to end over 70 years of war.

Currently, the “Korea peace appeal” campaign is in progress at the level of all churches in the United Church of Canada. I am writing this to appeal to the brothers and sisters of our Prairie to Pine Region to be more interested in this matter and to join the signing. 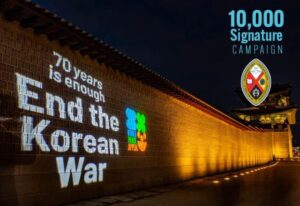 This completely ignored the Korean independence movement of the Koreans and the activities of the Provisional Government during the period when Japanese imperialism occupied the Korean Peninsula. This was the start of a tragedy.

The Korean War began in 1950 and lasted for three years, became a war that concretely informed the world that the era of the East-West Cold War had begun, and has created close to 10 million separated families in North and South Korea. And… they have been living in the pain of separation for 70 years! For 70 years!

However, the Korean War was not finished and is still remaining in a ceasefire state. The two Koreas are still in a state of confrontation. The world’s most heavily armed demilitarized zone (DMZ), which occupies about 240 km east to west, 2 km south, and 2 km north of the Military Demarcation Line, remains a place that no one can enter or cross over for 70 years.

I, as a United Church of Canada’s minister who came from the Korean Peninsula, would like to work together with you.

Your signature could be the beginning of a solution to this age-old problem. Your support and prayers will be able to become a loving hand that heals the pain of this history.

I want you all to join the campaign..!

You can find the information and sign on the United Church website: information here, and petition here.

The United Church of Canada joins in the global call to hold the government of the Philippines accountable for its human rights violations. Read More

As the United Church embraces a new Call and Vision, and makes Growth a key priority, the denominational office will integrate the expertise, energy, and ethos of its semi-autonomous innovation arm—… continue reading Read More

2022 was an interesting year for The United Church of Canada's Refugee desk. Here's a summary of the year's applications and arrivals. Read More